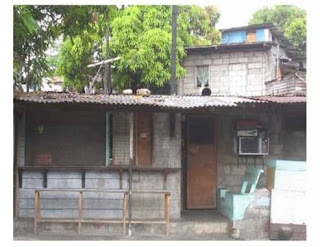 Voltaire was born to a carpenter father and a mother who did the neighbor's laundry. Their house shared the same address as maybe 10 others in the neighborhood in an alley in Pasay City. That address doesn't exist anymore. The place now sits in one of the center islands of the road that extended Buendia from Makati to Roxas Boulevard.

It was a 2-storey house made of wood, some good lumber but mostly made of old discarded materials brought home by his carpenter father. Maybe some where from homes being renovated.

All the four boys shared a mat on the floor and a big mosquito net. Their only sister, the eldest, had the luxury of her own mat and a small mosquito net all by herself. Their mom and dad slept on an improvised bed at the ground floor - - the plywood panel that divided the living room and the dining room  is un-nailed every night, laid down on three long wooden benches - - one on each end and a third bench in the middle.The main door served panel, when open during the day, served to conceal the open shelves that served as the linen cabinet where blankets, pillows, mosquito nets, and the mats are kept. Closing the door at night automatically "opens" the linen cabinet, with its contents ready for use that night. A cabinet door would be another expense that could take away maybe the budget for a week's meal.

Food was barely adequate. On good days, the kids will have cheese on pan de sal. A whole loaf of cheese would be cut in half, the other half kept for the next day. One half is then cut into pieces so that each family member - - all five kids, mom and dad, and grandma will have 1/8 of of the 1/2 loaf of cheese.

Voltaire one day planted ampalaya on the ground outside of the kitchen. It grew such that the vines crept to the "paminggalan". One day, he decided to have it for lunch, dipping the freshly picked ampalaya leaves in bagoong to go with boiled rice.

Mom did her share of keeping the house pleasant ebough to live in. She constantly painted the walls to conceal its age, and to hide the crevices from the uneven portions of discarded wood. She must have repainted so frequently the kids felt like the house was getting smaller each time, from the thickness of the layers of paint. Oh, she also did carpentry work on her own. She herself laid out bamboo halves on the kitchen floor to replace the already rotting wood panels, while dad was out earning a living.

The road in the alley was unpaved. When it rains Voltaire had to wear rubber boots to keep his feet dry to go to school. And wore his socks and shoes when he got to the main road.

When the place gets really flooded, some floor panels float in  the flood water, inside the house. Some nails have rusted and the wood panels are unable to hold on to the trusses.
Posted by Voltaire at 3:33 AM

Voltaire
I have struggled through life and have finally found my bearings. To make the travel meaningful and complete, it is my intention to share my experiences - - my pitfalls and my successes. It is in reflecting that we learn more. And it is in giving that we make ourselves whole.